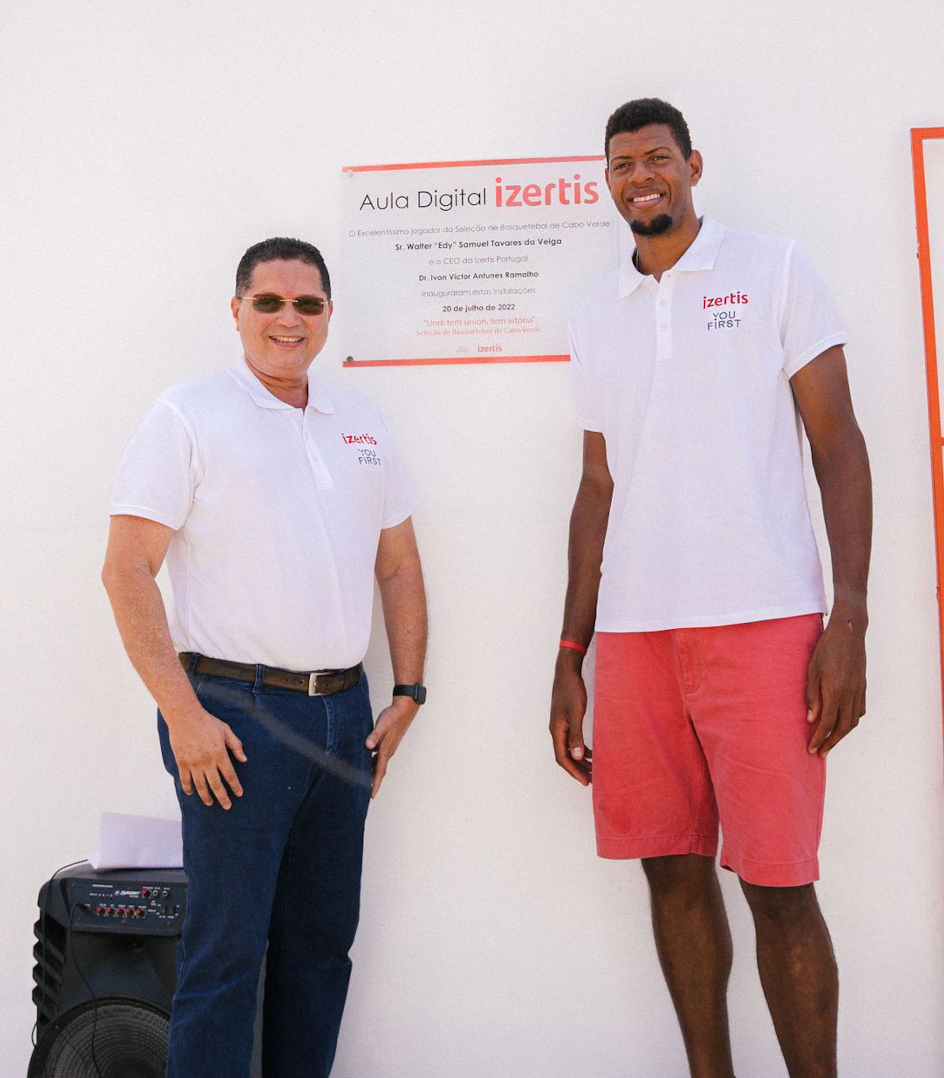 We have just inaugurated the third digital classroom in Cape Verde, which aims to break the digital divide and give children in Cape Verde access to information and communication technologies (ICT). This initiative will enable them to learn a solid knowledge base, which will contribute to the development and training of these young people.

The inauguration of this technological space, led by our entity, has had a "high level" sponsor. The Real Madrid and Cape Verde Basketball team player Walter 'Edy' Tavares has been named 'Ambassador' of the 'Aula Digital Izertis' project, and has been in charge of inaugurating these facilities located in Maio, the player's hometown.

It is precisely at this João Antonio Cruz Silva Primary School where Tavares spent his life as a student, and from the beginning he has been committed to the initiative, where more than 400 children will have access to technology training. "I want to be able to give back to this country what it has done for me since I was a child", has said Tavares during the inauguration.

We understand that we are at a crucial moment in the lives of these children, and that with the sum of small efforts from all of us we can change their future

The refurbishment of all classrooms, painting, installation of furniture, security and electrical sockets, as well as the donation of state-of-the-art computer equipment, projector and air conditioning, have all been purchased or carried out by local suppliers to contribute to the development and growth of the local economy.

With this new classroom, there are now three digital spaces inaugurated by our firm in the African country since 2019, when the first Technology School was inaugurated in the presence of the Prime Minister of the Republic of Cape Verde, José Ulisses Correia, in Santa Cruz.

In November 2021 we had the honour to donate the second Digital Classroom located in the region of Achada Fazenda where a total of more than 80 students have the possibility to learn computer skills and develop their digital competences.

With this new inauguration, more than 1,600 children have been able to benefit from access to digital facilities since we started this project in Cape Verde, so that they have the possibility of training in the field of technology and breaking the digital divide that exists in their environment.

"We understand that we are at a crucial moment in the lives of these children, and that with the sum of small efforts from all of us we can change their future. The idea is for this project to become a long-term commitment", has highlighted Ivon Ramalho, CEO of Izertis Portugal and Cape Verde.