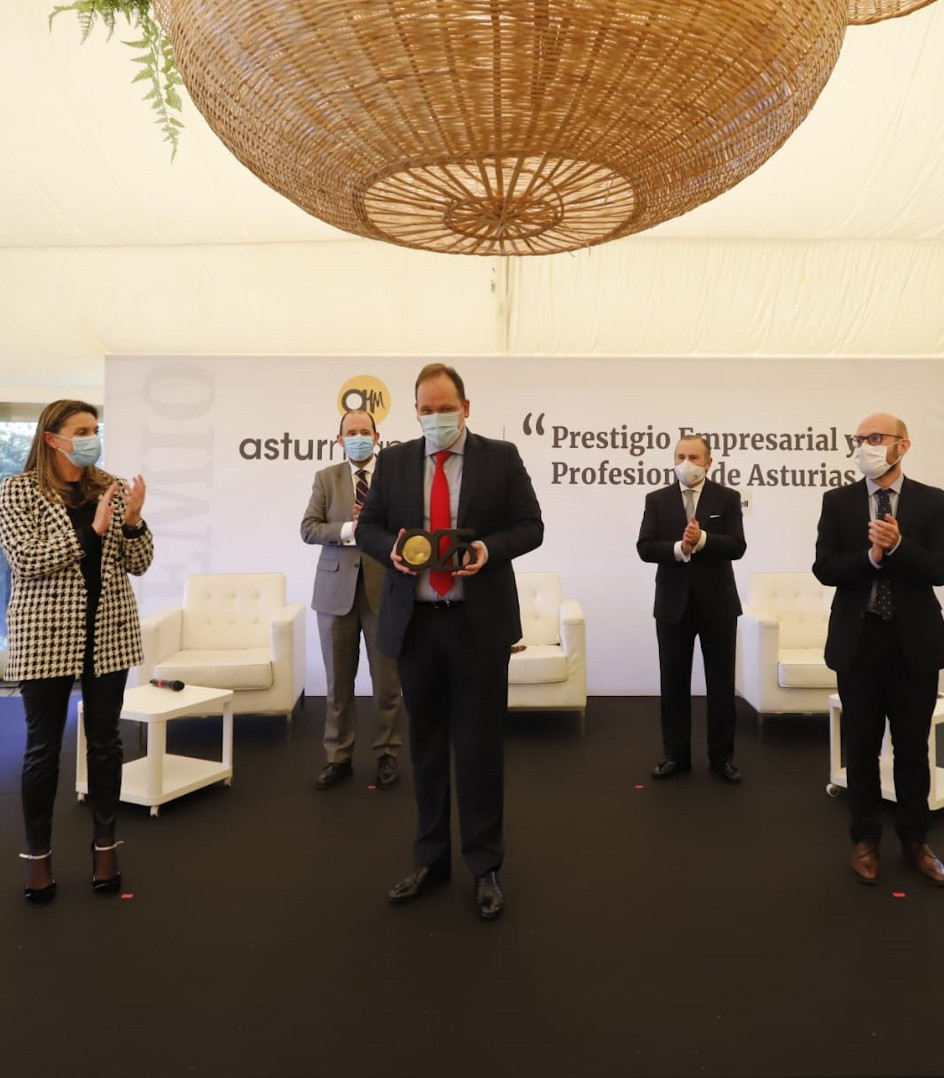 Our president, Pablo Martín, has been awarded the Asturmanager Prize for his professional career, acknowledging his “exemplary contribution” to the economic and business development of Asturias. During the award ceremony, the promoter association wanted to highlight “the position held at the head of a company that has always stood out for its innovative capacity and specialisation in the field of digitalisation”.

The 25th Asturmanager Prize ceremony, which took place in the Riega Palace in Gijon, had previously held a seminar about “The Digitalisation of the Asturian Company”, chaired by the association president, Montserrat Martínez. It included the participation of the president of the Asturian Federation of Entrepreneurs, Belarmino Feito, the CEO of Asturgar, Ángel Rodríguez Vallina, the CEO of SabadellHerrero, Pablo Junceda, and the award winner.

Martín founded Izertis 24 years ago, at a time when he was the only company worker. The company now comprises over 750 employees, with activity in 50 countries, and since November 2019 it has been listed on the BME Growth (Spanish value market).

The winner’s career has been intricately linked to the world of technology. He participates in various boards of directors in advanced services and technology-based companies . He has also been a Business Angel and Advisor for numerous start-ups and business associations, also linked to the digital world.

“Public acknowledgement for the work of companies is warmly welcomed, as well as the work their businesspeople and executives perform for the benefit of society as a whole. We should be constantly reminded that companies and entrepreneurship are the only way to generate wealth and well-being. Without them, progress would not be possible, nor a way to generate wealth, employment or well-being”, commented Pablo Martín during the gala.

In 1995, the circle of entrepreneurs decided to increase its activity by creating the Award for the Executive and Entrepreneur of the Year, to acknowledge the work and business and personal trajectory of different players in the Asturian sphere.

Businesspeople and executives from Asturias that undertake their activity both in and out of the Principality of Asturias borders, who perfectly embody the values that Asturmanager defends and promotes. To date, 24 businesspeople and professionals have received this award, at a ceremony attended by key figures from the business, economic and political world, as well as from the Principality of Asturias Government.